HOW MACA ROOT GOT ME PREGNANT

Not Only Once... But Twice!

First let me start off with my first experience with Maca Root. I had been trying to get pregnant for over six months with no success. I was getting really frustrated because I had been charting, using basal

temperatures, timing everything right with absolutely no results.

I was reading on a health website that mentioned the health benefits of Maca Root. It said that some studies were done in Peru on people who consumed Maca as part of their daily diet. Apparently, these people had a profound increase in vitality, energy and fertility.

I quickly ordered some raw organic Peruvian Maca Root powder for myself. When it arrived in the mail I opened the package and smelled it. The smell wasn't bad at all; it had the smell of some sort of root, such as a potato. I added a few tablespoons to a glass of orange juice and started to drink. Ugh! It was a horrible concoction!

I was determined to make it work. I decided to make a huge smoothie consisting of four bananas, about a cup of strawberries, water and some ice to make it cold. Added my two tablespoons of Maca and I actually was able to enjoy it!

I immediately started noticing the affects the Maca was having on my body. My energy levels were amazing and my libido shot through the roof. My husband was quite pleased with the results as well.

I was quite certain though that it wouldn't work right away. In fact, I had decided I would get myself a boob job to help myself feel better. So I met the Plastic Surgeon, set a date for a few weeks later and went to the operating clinic. I got in my hospital gown and they hook me up to the IV. One of the routine things they do right before surgery is have you take a pregnancy test. Well as I laid there waiting for the anesthesiologist, the nurse came over and started to unhook everything from me. When I asked what was going on, she said: "You can't have surgery, you are pregnant."

I was in total disbelief. The Maca had worked so quickly and I wasn't even expecting it to perform that well. My reasoning decided to chalk it up to coincidence and I left it at that.

When my son was around 18 months old I started to work on getting pregnant again. I was charting, doing my basal temperatures, everything I could think of. I tried and tried for over a year without any success. Then it

hit me! I realized that I wasn't taking the Maca like I had with my last pregnancy.

I immediately ordered some and started taking it. I was shocked to find myself pregnant yet again the very next cycle.

I tell you, there is something that really works about this Maca Root. I swear by it.

I would DEFINITELY try Maca. However, it has to be a certain kind and form. I conceived my Dd on the first try and figured we would have the same exp w/#2. Not so. When every test my Dh & I had showed nothing wrong and 4 cycles of Clomid showed nice size follicles but no preg we decided to go natural. We started ttc 10/05. Used Clomid 9/05, 10/05, 11/05 & 1/06. Began Vitex 2/06 and still did not conceive but I do think it helped a little with my cycle not that it was that off but it helped with recovering from the Clomid. I started reading something on another Board about Maca and it seemed to have a lot of success stories. However when they were successful it seemed to happen within the 1st 3 months of use. I did ignore the ones that said "Maca helped me. This was our 2ND month ttc and I was so worried after the first month". I paid attention to those that had been ttc for a while and there were many successes. It recommended "Navitas Organic Maca Root" purchased on Amazon. I being the skeptic wanted to make sure this wasn't someone who had a link to make money off of my purchases waited a while and did some more research. I finally ordered it in 5/06 and started it right away but it was the middle of my cycle. BUT when I had my period I definitely could tell something was going on. My periods are usually pretty painless w/cramps on the 1st day and teeny tiny little clots. This month I was having pretty bad cramps in the am of my 1st day, went to the bathroom and passed a quarter to half dollar size clot. After which my cramps were gone.
We made an appt w/RE but could not get in until August. So Dh and I decided to take the summer off obsessing realizing it wasn't happening. We both still took the Maca and I had actually purchased a capsule filler. June cycle was the first full month that I took Maca and I was shocked when I finally saw that BFP. I am 29 wks today. It was basically 1 1/2 months of using the Maca. I still have a full, unopened bag of Maca in my cupboard. I can't say for absolute certain that it was the Maca but it definitely helped. It is said to increase the Hubbies sperm count by 200%. My Dh was normal in that area but we figured it wouldn't hurt.

I posted a few days ago, asking about experiences with maca. I've had faint spotting since last Thursday, but no real AF, so today, I bought an hpt on my way to work. After 2 years, 7 IUI's, and about $5000 spent, my first try with $14 worth of maca worked. I got a positive!! A very dark positive! I know I don't post much, but reading what all of you write has helped immensely. I'm thinking I'm due aroung May 18, and I know there's several of you I'll be seeing on the DIM board.
Thanks again!
Laura

Pregnant after 1 month on maca

I'm back to report that after almost a year and a half of TTC I got pregnant after 1 month on maca!

Maca is the only reason i got pregnant with DD2

Maca is the ONLY reason I got pg with DD2. I had been on vitex for almost a year, it was much needed BTW, I finally consulted a new herbalist she suggested adding maca to my supplements which were vitex and a liver support tonic. I got pg within a few weeks following my first somewhat normal cycle in years, I m/c that pg, but got pg next cycle. I plan on using maca to TTC #3 here soon, and I was bfing.

I have had irregular periods for my whole life. When my husband and I tried to get pregnant, it didn't work. We went to the doctors. He put me on Clomid. I was on it for almost a year, and decided to try other means. After trying many different herbal and natural remedies, I tried the maca powder. The powder made me have my periods, but it tastes horrible (sorry), so I wasn't as regular as I should have been in taking it. I started taking Maca in the pill form. My first cycle using it, I got pregnant! I am now 11 weeks along. I can't wait to hear the heartbeat in a few weeks. If you are trying to conceive, I say, its worth a try. It doesn't cost much. (Especially compared to fertility treatments by doctors) and it works, at least for me. Hopefully this is helpful. And I hope it works for you! :) 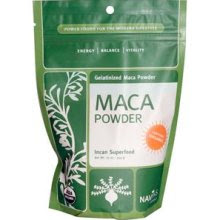 Omo Franca
I'm a professional proofreader, writer and researcher with a special interest in fertility and wellness.